At the closing MiPP project in Sussex last week. Due to a concatenation of various cirumstances, I had to take a large broomstick, which will be used in next week’s motion capture exercises at Butser Farm and in Sussex, on a set of trains from Reading, via the EVA London 2011 conference in Central London, to the workshop in Falmer, Sussex. Given this thing is six feet tall and required its own train seat (see picture), I got a variety of looks from my fellow passengers, especially on the Underground, ranging from suspicion to pity to humour. Imagined how one might have handled a conversation: ‘There’s a logical explanation. Yes, it’s going to be used as a prop in an experiment to test the environment of Iron Age round houses in cyberspace versus the real thing in the present day.’ ‘Oh yes? And that’s your idea of a logical explanation is it?’

Of course I could have really freaked people out be getting off the train at Gatwick Airport and wandering around the terminal, asking for directions to the runway. 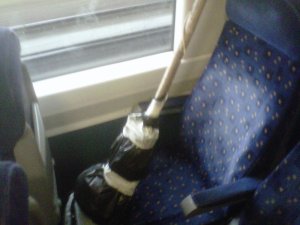 As with the entire MiPP project, the workshop was highly interdisciplinary. A varied set of presentations included ones from Bernard Frisher of the University of Virginia, on digital representation of sculpture, and from colleagues at Southampton on the fantastic PATINA project. All of which coalesced  around questions of process, and how we represent it. Tom Frankland’s presentation on studying archaeological processes, including such offsite considerations as the difference between note taking in the lab and in the field, filled in numerous gaps of documentation that our work at Silchester last summer left.

When I got to my feet on day to two present, I veered slightly off my promised topic (as with most presentations I have ever given) and elected instead to reflect on the nature remediated archaeological objects. I would suggest that there is a three-way continuum on which any digital object representing an archaeological artefact or process may be plotted: the empirical, the interpretive and the conjectural. An empirical statement, such as Dr. Peter Reynolds, the founder of Butser Farm would have approved, might state that ‘the inner ring of this round house comprised of twelve upright posts, because we can discern twelve post holes in ring formation’.  An interpretative conclusion might be built on top of this stating that, because ceramic sherds were found in the post hole, cooking and/or eating took place near to this inner ring. This could in turn lead to a conjecture that a particular kind of meat was cooked in a particular way at this location, based not on interpretation or empirical evidence immediately to hand, but on the general context of the environment, and on what is known more broadly about Iron Age domestic practice.

More on all this next week, after capture sessions at Butser.

I do various things, but mainly I am a Senior Lecturer in Digital Humanities at King's College London's . My interests include things computational, cartographic and archaeological. View all posts by stuartdunn