More on corpse roads, or rather a corpse road. As noted in my previous post, there is plenty of circumstantial evidence for the psychological power of corpse roads, or corpse paths. They connected communities, and provide tantalizing insight into the importance humans attach to movement through the landscape at critical points of their lives. But hard facts are hard to come by. In 1928, the journal Folklore published a Correspondence from “Wm Self. Weeks” entitled Public Right of Way Believed to be Created by the Passage of a Corpse [Shibboleth login needed]. Having debunked this actual notion itself (with reference to an earlier Q&A in the journal Justice of the Peace, a “legal journal mainly devoted to matters affecting Magistrates and Local Authorities generally”), Weeks goes on to propound the theory that the idea of the corpse path comes from an agricultural practice of deliberately leaving a strip unploughed along a field’s edge, to allow the carriage of bodies: ”bier balks … wider strips of turf left between the ploughed strips of land in certain places expressly for funeral ways” (p. 935).  Weeks quotes in support of this view correspondence in the Times Literary Supplement, in response to a previous letter on the subject he published there ten years previously. This came from L. R. Phelps of Oriel College, Oxford. Phelps writes:

In many parishes the church path is a familiar feature. Where I knew it best, at Littleworth, in Berkshire [now Oxfordshire], it connected an outlying hamlet with its parish church at Farringdon [sic], some two miles off. The characteristic of a ‘church path’ is that it is never ploughed over, but stands out from the field, hard and dry, and of a width sufficient to allow the bearers of a coffin to walk abreast along it.

Faringdon is not too far away from me so recently, along with the lady in my life (whose capacity for accommodating her husband’s more oddball obsessions is quite remarkable; she even provided the salmon sandwiches), I drove up to take a look at this path which Phelps was aware of, apparently from personal recollection. A public right of way still exists between Littleworth and Faringdon, as can be seen from the data provided by Oxfordshire County Council, and made available as KML by Barry Cornelius on his thoroughly excellent Rights of Way maps website:

Faringdon, and its C11th church, is at the western end of the path. A 2014 archaeological survey of the environs, in preparation for new facilities being built at the church, found evidence for 341 burials of a range of ages. Of course one cannot easily tell from such evidence the places of death, and thus where the bodies were borne from, but in their conclusion the investigators note:

“The community of believers excavated at All Saints comprised a broader church. Although no clearly high-status individuals were recovered, the investigation revealed a broad demographic section through the population of men and women, children and adults. The excavation showed the degree of care attached to the ill and dying, as well as concern for the well-being of the dead. The prosaic realities of country life and death from the late medieval to 19th century were revealed by the work carried out All Saints, Faringdon.”

As for the path from Littleworth: two clues immediately support Phelps’s recollection. At Littleworth itself, a footpath sign pointing west at the edge of the village indicates “Church Walk” to Faringdon (below left). Secondly, just outside of Faringdon itself is “Church Path Farm” – also labelled thus on Google Earth – the site of which includes a curious chapel-like outbuilding, with Gothic-style arching (below, right).

The walk itself – flat, easy going, suitable for the transportation of a load – crosses a total of four fields. The easternmost is large and flat, recently harvested of (I think) kale. The pathway adopts a slightly different tangent to the plough lines (see pic below) – which might be of some

significance, as these at least should preserve the orientation of the field. The slight difference between the path and the orientation suggests this field might have been sub-dived in to strips of a more south-westerly orientation than it is today, and that the path thus pre-dates it. The most obvious reason for this would be a change to accommodate the construction of London Street to the south, which connects Faringdon to the A420.

The westernmost section of the route, from Grove Lodge to Church Path Farm is characterized by deep, old-looking hedgerows – see picture below, left (from Church Path Farm, the route down into Faringdon itself is a modern metalled road, obviously optimized for vehicles with the hedgerows accordingly removed). It is these that make me think that Weeks and Phelps might have been on to something. These hedgerows do not simply follow the line of the field boundary as the path does to the east (below), but they delineate a gap between the fields themselves. This would be consistent with a route deliberately left to enable the passage of a bier party – a “bier balk”. 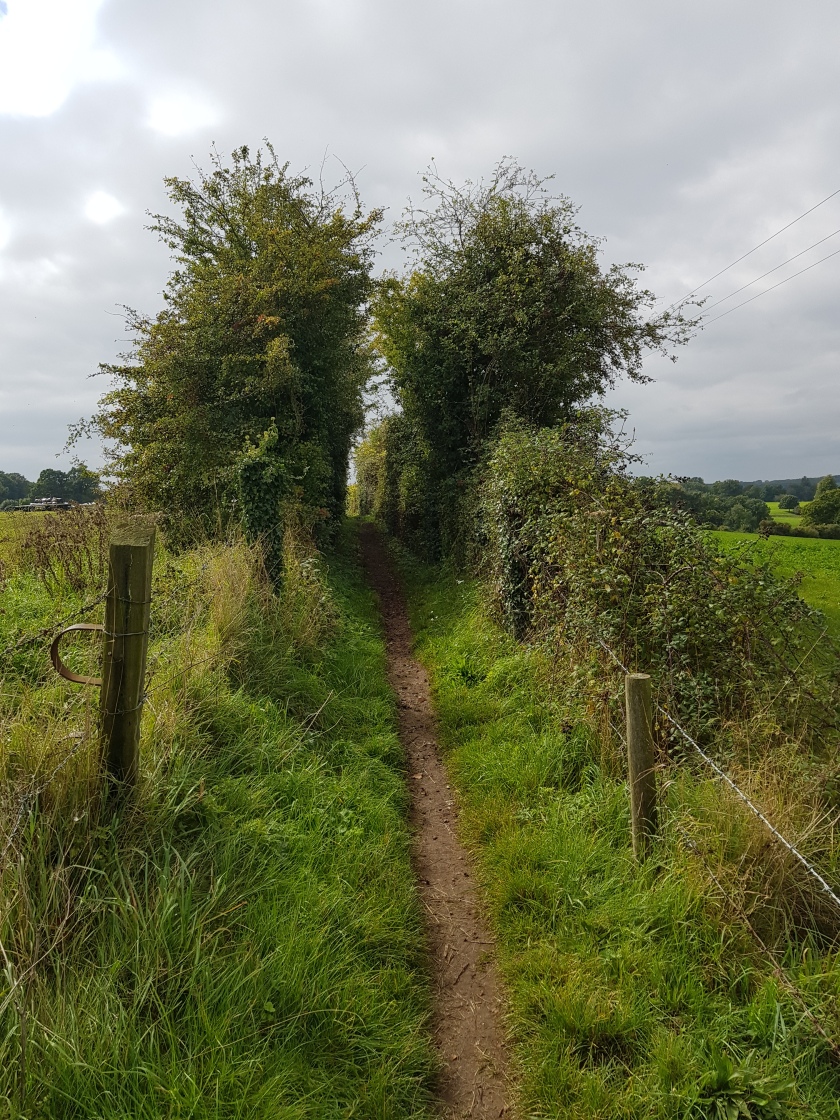 The Oxfordshire/Cornelius map above indicates another Right of Way heading north from Church Walk at Grove Lodge. This path is still clearly visible in the landscape, skirting east to avoid Grove Wood (see image above). Could this have served as another corpse path, perhaps linking the settlements of Thrupp and/or Radcot with the church at Faringdon? Maybe, but the point is that the “bier balk” hedgerows appear on Church Walk only at this point, and head west, past Church Path Farm and down to the town. Could it be therefore that only the section of the path *near* the settlement, which leads down to the churchyard itself, had the characteristics of a corpse path, and that the Shakespearean notion (see previous blog post) of dedicated pathways stretching across the pre-Enclosure countryside are a literary device?

I think this is probably so. There are exceptions – for example the Mardale to Schap route in Cumbria has a number of attestations, and is over six miles long, but I wonder if this is something to do with the extreme remoteness of the area and moorland topography – the “vital” needs to convey bodies for burial, and the challenges for doing so, stands out more in such conditions. But elsewhere, they were short sections of routes, proximal to the church, and would have been the aggregated path of more than one route for bier parties – which would be consistent with local people attaching significance accordingly.

I do various things, but mainly I am Professor of Spatial Humanities at King's College London's . My interests include things computational, cartographic and archaeological. View all posts by Stuart Dunn